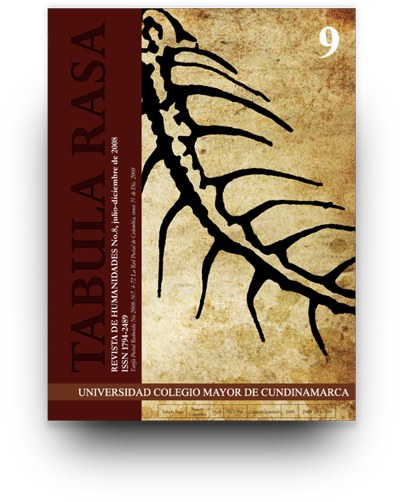 Maribel Florian-Buitrago maribelflorianbuitrago@yahoo.es Universidad Colegio Mayor de Cundinamarca Abstract: Given that it was in the 19th century when, confronted with the emergence and consolidation of nationalisms, the formation of national identities became the focus of the most diverse cultural practices, especially literature, we decided to resort to one of the most representative works of Colombian […]

Youth During the “Frente Nacional” (National Front): Rock and Politics in Colombia in the 60s

Hernando Cepeda Sánchez hernando.cepeda@gmail.com Universidad del Rosario, Colombia Abstract: This article is aimed at demonstrating that the young people of the 60s in Colombia who dedicated themselves to producing rock music adopted as their ideological orientation the social principles of progress and modernity of the central countries. The cultural models that guided this youth movement […]

Antonio Lastra antoniolastra@latorredelvirrey.es La Torre del Virrey. Revista de Estudios Culturales Abstract: This interview or exchange of opinions was born out of the necessity to extend the review of the Spanish edition of the book “La idea de America Latina” (The Idea of Latin America). As readers will advise, only reading the book is not […]

Edgardo Lander elanderl@yahoo.com Universidad Central de Venezuela Abstract: The transformations that have occurred on the planet as a consequence of the reconcentration of power and the growing commercialization of all aspects of life during the past three decades, from the beginning of this neoliberal counterattack initiated during the governments of Reagan and Thatcher, have had […]

Zulma Palermo palermo@unsa.edu.ar Universidad Nacional de Salta, Argentina Abstract: The proposal of decolonial thought requires the critical generation of a genealogy detached from colonial power. In this search, the article proposes an excursion through some of the circulating explanatory categories of the Latin American academic discourse at the moment of the emergence of paradigmatic changes […]

Towards a Decolonial Transmodern Pluriversalism

Ramon Grosfoguel  grosfogu@berkeley.edu University of California – Berkeley, USA Abstract: This article discusses the concept of the Universal in the western philosophical tradition and proposes Other, decolonial ways to think about Uni-versality as Pluri-versality, based on the thinking of Aimé Cesaire, Enrique Dussel and the Zapatistas. The first part discusses the concept of “universal” from […]

Anti-Cartesian Meditations: About the Origin of the Philosophical Anti-Discourse of Modernity

Enrique Dussel dussamb@servidor.unam.mx  Universidad Autónoma Metropolitana – Iztapalapa, México Universidad Nacional Autónoma de México Abstract: Descartes is considered the first modern philosopher. If modernity is interpreted in the way decolonial thought or liberation philosophy interpret it, we would have to redefine the 16th century and the philosophers of that century as the origin of modern […]

Interculturality, Plurinationality and Decoloniality: Political-Epistemic Insurgences to Refound the State

Catherine Walsh cwalsh@uasb.edu.ec Universidad Andina Simón Bolívar, Ecuador Abstract: Nobody denies that in the current times, South America is living through changes, innovations and historical ruptures. Here we are interested in those innovations and ruptures; the ones that signal and profile new sociopolitical and epistemic formations, constructions and articulations that are the result and part […]

Latinos, Migrants and the Decolonialization of the United States Empire in the 21st Century

Ramón Grosfoguel grosfogu@berkeley.edu University of California, Berkeley, USA Nelson Maldonado-Torres nmt@berkeley.edu University of California, Berkeley, USA Abstract: This article analyzes the marches in which multitudes of immigrants participated in the United States during March, April and May of 2006. These marches were the largest in the history of the United States, with the participation of […]

Capoeira Angola: Flights Among Hummingbirds. A Decolonialization Technology of Subjectivity

Juan Camilo Cajigas-Rotundo lujanrot@hotmail.com Pontificia Universidad Javeriana, Colombia Abstract: This article is about the emergence of practices such as the Capoeira Angola, which propose a scenario for collective political experimentation about the own self, as a particular “other” technology of decolonialization of subjectivity, aimed at the re-enchantment and aethetization of everyday life. The author assumes, […]

María Lugones  mlugones@binghamton.edu Binghamton University, USA Abstract: This article investigates the intersectionality between race, class, gender and sexuality with the objective to understand the worrying indifference that men show towards the violence that is systematically perpetrated against women of color, in other words, non-white women that are victims of the coloniality of power and, inseparably, […]

Decolonization and the Decolonial Turn

Nelson Maldonado-Torres nmt@berkeley.edu University of California, Berkeley, USA Abstract: This article outlines two issues related to the decolonialization of the being and of knowledge. The first topic deals with the current validity of decolonialization, and the second one with the idea of a decolonial turn. This second topic entails the discussion about the idea of […]

Hermeneutics of Democracy: The Thought of Limits and the Colonial Difference

Walter Mignolo wmignolo@duke.edu Duke University, Durham, USA Abstract: History tells that Mahatma Gandhi was asked what he thought of civilization. Gandhi answered and said “civilization was a good idea”. The same can be said of “democracy”. This article proposes a decolonial lecture of the concept of “democracy” and suggests the incompatibility between democracy and capitalist […]