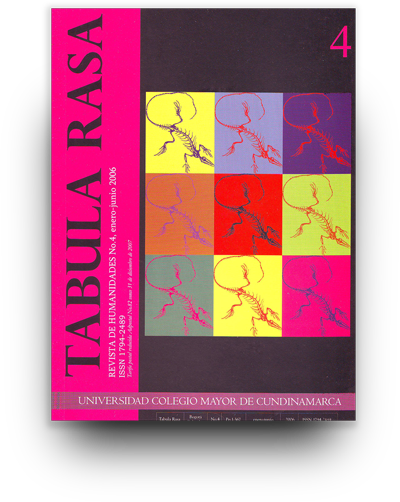 Martha H. Arana Ercilla maranae@yahoo.es Universidad Colegio Mayor de Cundinamarca Universidad Pedagógica Nacional Abstract: This article is the product of the author’s investigation into integral training, which should be based on a unity between socio-humanistic and scientific-technologiacal knowledge. Those two areas have been seen as two separate fields, even opposites, which has led to equivocal […]

On some of history’s possibilities

Leonardo Montenegro M. l.montenegro@javeriana.edu.co Pontificia Universidad Javeriana Abstract: This text presents a reference about several distinct approaches to the discipline of history that have been established as milestones at diverse moments of their trajectory. The author chooses six of those to discuss their contributions and failures in respect to indirectly related topics of culture, identity […]

Sustainability of Informal Housing Development. Analysis based on the study of the «Puerta al Llano» neighborhood habitat

Nieves Lucely Hernández Castro nhernandez@unicolmayor.edu.co Universidad Colegio Mayor de Cundinamarca Abstract: Inhabitants of informal housing construct their habitat out of self-managed impulses and constructive production within determined physical surroundings in a specific enironment. The inhabitants establish direct relationships of accessibility and sustainability while implanting themselves in one place. Throughout the different stages of consolidation they […]

The Vicissitudes of Peace. On the paths of Juan de la Cruz Varela’s life

Laura Varela Mora laura.varela@uan.edu.co Universidad Antonio Nariño (Colombia) Yuri Romero Picón yuri.romero@uan.edu.co Universidad Antonio Nariño (Colombia) Abstract: This paper is based on the political, economical, and social confrontations between the farmers and the landowners in the region known as Sumapaz and west Tolima, central Colombia. In particular, this paper analyzes the personal experiences of Juan […]

Colonial Painting and the Education of the gaze. Conformation of identities and otherness

Vivian Marcela Carrión Barrero viviancarrionbarrero@yahoo.es Universidad Pedagógica Nacional Abstract: This writing tries to analyze one of the ways a policy of “otherness” was constructed and produced in the context of the 17th century, during the Colony. Showing the way how a discourse was elaborated and appropriated through images, in which a policy of segregation was […]

Nara Fuentes Crispín narafuentes@hotmail.com Universidad Nacional de Colombia Abstract: Supported by James Scott and Robert Stam among others, this article represents a proposal for reading the Colombian classic by Maria de Jorge Isaacs. The novel’s narrator creates a discourse that hinders the appreciation of the voices and culture of the black slaves. This concealment might […]

María Himelda Ramírez mhramirezr@unal.edu.co Universidad Nacional de Colombia Abstract: This article refers to the discourses about child abandonment that circulated in Santafe de Bogota during the first half of the 17th century, in the context of redefinition of feelings towards childhood and the revaluation of maternal love. The work also studies indigenous solidarity in cases […]

Is a general theory about conservative parties possible?

Arturo Claudio Laguado Duca alaguado@yahoo.com Universidad Nacional de Colombia Abstract: This article suggests an alternative hypothesis for the interpretation of the construction of the Latin American Conservative Parties to the theories of the core constituencies. To this end, in the first part we will discuss three authors – Corblit, Gibson and Middelbrook – who sustain […]

Geography and the African Diaspora: an assessment

Judith A. Carney carney@geog.ucla.edu University of California, Los Angeles, UCLA (USA) Abstract: The study of the African diaspora has become a vibrant area of research and teaching in recent years across the disciplines. However, geographical contributions remain few. This article seeks to reverse that trend. Relevant work by geographers on the Black Atlantic is reviewed […]

The Red Thread. The revolt against the Aznar Government following the attacks of March 11, 2004

Pablo Iglesias Turrión pabloiglesias@cps.ucm.es Universidad Complutense de Madrid (España) Abstract: In this article we will analyze some aspects of the popular revolt against the Spanish Government in Madrid on 13th March 2004, after the Al Qaeda attacks. We will explain how that revolt was not just a national or local event, but a systemic crisis […]

The Power and Resistance in Michel Foucault

Reinaldo Giraldo Díaz regiraldo@hotmail.com UCEVA -Unidad Central del Valle del Cauca (Colombia) Abstract: This paper analyzes the concepts of power and resistance in Michel Foucault‘s books during his genealogic period. Specifically, after his book L’ordre du discours, a programatic text, until his first volume of The History of Sexuality: An Introduction. The paper deals with […]

Ian Parker i.a.Parker@mmu.ac.uk Manchester Metropolitan University (UK) Abstract: Speculation around the role of technology and human nature are encountered in science fiction writing, and this writing provides discursive resources for post-industrial subjects. The kinds of futures that are outlined in science fiction help us to understand what kind of subjects some of us have become. […]

Peter Wade peter.wade@man.ac.uk Universidad de Manchester (UK) Abstract: The article first reviews evidence of the economic, political and social exclusion of Afro-descendent and indigenous groups in Latin America. Then it surveys the array of multiculturalist legal and political reforms that have taken place in the region in the last 15-20 years, before analyzing the various […]

Geographies of Knowledge in World Politics

John Agnew jagnew@geog.ucla.edu University of California, Los Angeles, UCLA (USA) Abstract: The problem of “foundations” is a crucial one for any field, particularly perhaps one with as varied a possible repertoire of elementary sources as the study of world politics. In this paper, I want to draw attention to some different ways of thinking about […]

Ramón Grosfoguel grosfogu@berkeley.edu University of California, Berkeley (USA) Abstract : This article discusses the epistemic implications of the de-colonial turn of the decolonization of the “global capitalism” concept, as it has been used in the paradigms of political economy and cultural studies. Other terms that are discussed include “colonization of power”, “border epistemologies” and “transmodernity” […]