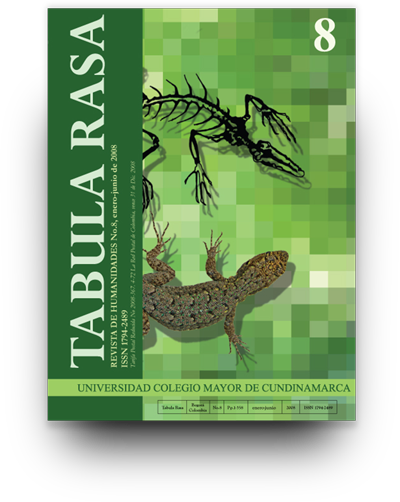 Rethinking the Geopolitics of Knowledge: A Challenge to Imperial Visions

David Slater d.slater@lboro.ac.uk Loughborough University, UK Abstract: The global objective of these exploratory notes is to open the debate about certain important aspects of the intersections between power, knowledge and geopolitics, and doing so in the context of the resurgence of imperial visions and the urgent need for a decolonialization of the imagination. The analytical terrain […]

Revising The Rules Of The Game: A Conversation With Pablo Iglesias Turrion, Jesús Espasandín López and Iñigo Errejón Galván

Walter D. Mignolo walter.mignolo@duke.edu Duke University, Durham, USA Abstract: This article is a response to the discussions that developed in the summer seminars at the Complutense University in Escorial in June of 2006. I have condensed the answers into two topics that I think are the axes around which the debate took place: the exteriority […]

Returning the Ball to the Field: Dialogues with Walter Mignolo

The decolonial option: detachment and opening – a manifest and a case study

Walter D. Mignolo walter.mignolo@duke.edu Duke University, Durham, USA Abstract: The decolonial option in politics and in epistemology was the direct consequence of the imperial/colonial invasion, first in Anahuac and Tawantinsuyu, and since the middle of the XVIII century in different spaces of the Islamic world (i.e. the British colonization of Hindu-Muslim India, the French colonization […]

Coloniality, Imperiality and the debate about Overcoming Them

An Approximation to Social Responsibility in the Formation of Social Workers from the Studies of Science, Technology and Society

The Game of War: Boys, Girls and Teenagers in the Armed Conflict of Colombia

Approaches to the Problem of the Neo-Hispanic Creole: The Ego and the Others in Alboroto y Motín de los indios de México by Carlos de Sigüenza y Góngora (1645-1700)

Catalina Restrepo G. catalina.m.restrepo@vanderbilt.edu Vanderbilt University, USA Abstract: Representative of the creole imaginary of the lettered city, Alboroto y motín de los indios de México, by Carlos de Sigüenza y Góngora (1645-1700), is essential to an understanding of both the discursive webs through which the creole elite expressed its paranoia concerning the colonized Other, and […]

The Supply of Santafé Before the Independence: Llorente’s Store

Robert Ojeda Pérez robert.rojeda@gmail.com Academia de Historia de Bogotá, Colombia Abstract: This article intends to uncover how the city of Santafé was supplied in the days before the independence. As a reference, we use the store of José González Llorente, a Spanish merchant who supplied the society of the capital with various consumer goods, and […]

Roberto Almanza-Hernández almanzarob@gmail.com Pontificia Universidad Javeriana, Colombia Abstract: This paper briefly presents what is, in my opinion, the specificity of cultural studies and its relevance as an analytical “tool box,” as well as a way of understanding. I pay particular attention to the way in which Stuart Hall relates himself to the theory, using some […]

Questions of Method: “Eventualization” and Problematization in Foucault

Eduardo Restrepo eduardoa.restrepo@gmail.com Pontificia Universidad Javeriana, Colombia Abstract: Eventualization and problematization are categories proposed by Foucault that have not had the same impact as others of his concepts, such as biopolitics, governmentality, and genealogy. Whereas the latter notions have become part of the contemporary theoretical imaginary (mostly in the United States) and are used in […]

The Perspective of Gender and Criminology: A Prolific Relationship

Norma Fuller nfuller@pucp.edu.pe Pontificia Universidad Católica del Perú Abstract: This article revises the most important tendencies in studies about criminology and gender and analyzes the results of several investigations carried out to discuss what have been the principal contributions, open issues and questions. It concludes that these studies denounce the androcentric approach of criminology, visualize female […]

Alex Betancourt Serrano abs@uprrp.edu Universidad de Puerto Rico, Río Piedras Abstract: This article explores Walter Benjamin’s political and historical proposals that emerge from his Arcades Project. The essay outlines Benjamin’s criticism of historicism and presents his proposal of historical interpretation as a dream taking into account the dialectic relationship between the past and the political […]

Diversity and Culture: Objectification and Situationality

Alejandro Grimson agrimson@unsam.edu.ar Universidad Nacional de San Martín, Argentina Abstract: Anthropology has theoretically confronted racism and discrimination. The paradox is that once the concept of culture started to become widely accepted, it was also redefined as race. Another paradox is that the arguments for diversity and relativism were appropriated by sectors that promote discrimination. This […]

Clifford Geertz and the Assembly of a Critical Anthropological Project

Carlos del Cairo delcairo@email.arizona.edu University of Arizona, USA Jefferson Jaramillo Marín jefferson.jaramillo@javeriana.edu.co Pontificia Universidad Javeriana, Colombia Abstract: Beginning in the mid-1960s, anthropologist Clifford Geertz (1926-2006) transformed the conventions of writing ethnography. His anthropological project, named symbolic, hermeneutic or interpretative anthropology, was in continuous flux as he elaborated it. According to some, the Geertzian intellectual project was […]