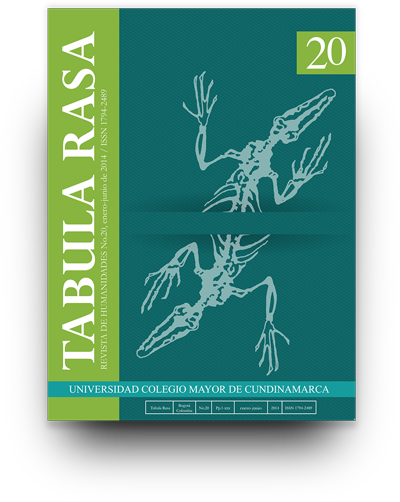 Abstract: In the research work on “Imaginaries among peddlers in Bogotá’s transportation system”, being developed at Universidad Colegio Mayor de Cundinamarca, one can note that when studying language in a context, a lexical item may change or get a deeper meaning as a result of the cultural and ideological situation it works in. This is […]

Abstract: This paper addresses the complex affective lives of enslaved population during the process of independence in Colombia. Generally speaking, many restraints imposed during the Colony continued to be in force, both in family ties among slaves and in affective relationships forged with white individuals. At the end of the day, scant were advances in […]

Materiality as a Historiographical Scheme —Spaces, Maps and Colonial Settlements on the Patagonian Coast (18th Century)

Abstract: At the end of the 18th century, the Spanish colony devised the population plan for the Patagonian coast aiming to reaffirm its presence in the area. This essay builds upon the discussion of the “master account” Argentinean historiography has put at stake, such as the implied naturalization of State-nation borders towards the past, and the […]

Abstract: This article aims to ponder on phrenology’s discipline plotting from an anthropologicalhistorical perspective, being phrenology a threshold from which to discuss the intellectual influence it had in Argentina. By recovering a series of case studies on this field in Argentina, we will illustrate the theoretical senses underlying the practice of anthropometric measurements and physiognomic […]

Regimes of National Belonging in Contemporary Venezuela and Dominican Republic

Abstract: This paper examines two explicitly exclusive/inclusive national belonging regimes, by discussing two case studies of current negotiations on alien status and nationality in Dominican Republic and Venezuela. In the latter, from the governmental initiative in 2004 for “alien people regularization and naturalization”, Venezuelan citizenship was bestowed on undocumented immigrants, some of them as a […]

Ethnography on the Anthropological Work and an Anthropologist’s Inquiry for his own Origin. The Practice of Jtsenojuabnayá or “To Exist Pondering” among Kamëntšá People

Abstract: Kamëntšá nation is the point of departure of this discussion, as a space to practice jtsenojuabnayá, “to exist pondering” (or doing research) of their own world. This notion ims to reflect upon the anthropological work on the side of those working in it. In this case, ontological digging goes beyond a mere representation and interaction […]

Abstract: This paper deals with the sites where intracultural and intercultural strains are produced, which are transversal both to internal and external spaces of indigenous mobility and thinking. Thus, straining scenarios are observed to be woven by the transformational rationales of an “ethnically diverse Colombia”. In order to demonstrate how strains are produced, an account […]

Indigenous Homosexualities and Decoloniality —Some Reflections Based on Two-Spirit Criticism

Abstract: Our contribution in this article lies on gathering and analysing literature on indigenous homosexualities in Brazil, seeking to identify research potential in the light both of literature available on queer theory, and the two-spirit-approach authors and concepts, such as decoloniality and coloniality of gender. As we will see, there are several possibilities in terms […]

Anthropocentric and Eurocentric Foundations of Contemporary Poverty and Communication Idea

Abstract: This paper reflects around the treatment given to the concepts of poverty and communication throughout the last 60 years by a number of theories of development existing in the Latin American region within the social sciences. Particularly, we will focus our discussion on how those concepts have inherited an Eurocentric and anthropocentric global power […]

Abstract: This paper intends to explain the development of cultural relations, considering it cannot be understood from a social darwinism approach. Interculturality is shown to be a stage in such cultural development, and to be ephemeral and seldom actualized from a historical perspective, as it becomes a passage to transculturality. Also, we intend to prove […]

Abstract: This paper argues that some contemporary biopolitical histories inherit problematic philosophies of history whose historical-geographical borders recapitulate colonial modes of thought. In the first part, I argue that the philosophies of history that operate in the background of Foucault and Agamben’s presentation of biopolitics cannot be maintained in its Western simplicity. In response to […]

Abstract: This paper intends to establish a critical dialogue with Catherine Walsh’s proposal for interculturality-decoloniality, which was developed within the framework of the modernity/coloniality project. Taking as the object of analysis and discussion the main arguments this author provides in situations of inequality in the Americas, their most fertile aspects are exhibited, along with theoretical-political […]