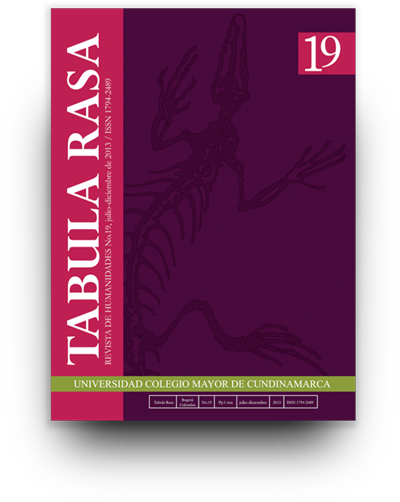 Like a closure —Equality, honor and friendship between direct contenders after the Falklands war

Epistemic Racism/Sexism, Westernized Universities and the Four Genocides/Epistemicides of the Long 16th Century

(De)colonial symptoms: Grosfoguel as a reader to Foucault

The device: a grid of analysis for visibilizing subjectivities

Globalization and reconfiguring the public-private —Towards a global public sphere?

Abstract: This work gathers a set of reflections on residential tourism that emerge after finishing up a research project. Fundamentally, these are articulated in a critical sense, since they aim to point to theoretical gaps or constraints on the ways to approach this phenomenon from a social science perspective, especially in everything concerning its socio-political […]

Abstract: This paper analyzes the relations between black groups from the Colombian South Pacific and the Order of Hermits of St. Augustine in terms of strains between two different “cultural models”, during a period of transition for ethnic identities and State nationalism. The black group model is related to their ethnogenetic process, which is incubated as […]

“May the afro be a part of the Argentinean nation”: state resignifications of black memories

Abstract: The questioning on national narrative by subaltern sectors has revealed its heterogeneous, conflictive and historical character, weakening the assumed legitimacy of the hegemonic narrative. This has made silenced narratives to be re-memorized and, therefore, “new” memories under dispute to emerge. This paper is therefore focused on the recent processes of visibilization and remembrance of […]

Abstract: Within the bounds of the territorial self-government instruments in force in Colombia, such as indigenous reserves, afro-descendant collective lands, and peasant reserve areas, this text makes their boundaries evident face to new spoils, like a symbolic one, in the field of handcraft. To do that, this work refers to the experience of Kamsá indigenous […]

Abstract: This paper groups together several reflections and analytical perspectives as a result of my PhD research, inquiring on the articulations between identity, economics and politics. Based on an ethnographic case study —the Huarpes— and the selection of a specific regional context — Mendoza province—, this work is an effort to inquire and analyze the […]

Use of aesthetic modelants, as a body shaping process among transgender women

Abstract: Most research in Colombia regarding trans population health issues is related to sexually transmitted diseases. However, regarding body transformation has been scarcely studied despite its importance for the population. Therefore, this document describes the process of body formation from aesthetic modelants among some transgender women working in prostitution in Los Mártires neighborhood. Driven by social […]

Abstract: This paper presents a theoretical framework for the study of relations between mass media and memory from a psycho-social and a communicative perspective. As it is well known, mediatic narratives play a fundamental role in the construction of shared memory. But, can media build a memory beyond subjects or collectives themselves? Our main pressuposition […]

Abstract: This paper presents the methodology used to prepare an Atlas on armed conflict in Antioquia. Particularly, we focused on the analysis of quantitative map construction through Geographic Information Systems. This paper remarks that even though there is an emerging academic debate around the nature of databases on armed conflict, discussion on mapping methodologies usefulness, […]

Abstract: Collaborative research is back on the agenda these days. It has certainly become more accepted in mainstream academia than back in the 1970s, when Orlando Fals Borda and others developed what came to be known as Participatory Action-Research (PAR). Research councils are increasingly interested in funding collaborative research proposals, seemingly willing to listen to […]