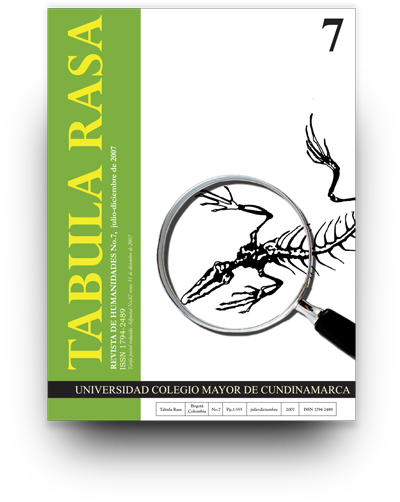 Ulrich Oslender Ulrich.Oslender@ges.gla.ac.uk Department of Geographical & Earth Sciences University of Glasgow, Scotland (UK) Abstract: In this paper I engage with current debates over the role of the public intellectual in a world shaped by re-emerging binary thinking and old dualisms in new disguise. As some see “new public intellectuals” emerging in critical Geography, I […]

Social Sciences as Integrators of Knowledge in the Human Dimension

Joaquín Molano Barrero jmolanob@hotmail.com Universidad Nacional de Colombia Abstract: The institutionalization of science is linked to our dependence and our misery. It has its projection on research, docency, geopolitical control and the expropriation of our resources. This article analyzes the social sciences in relation to other disciplines and areas of knowledge, taking as element of […]

Martha Cecilia Andrade Calderón mandradec@unicolmayor.edu.co Universidad Colegio Mayor de Cundinamarca, Colombia Abstract: This article is about the results reported on the descriptive and qualitative piece of research on reading skills. The study identifies the skills, attitudes, and reading competence of the students at Colegio Mayor de Cundinamarca University and suggests an academic program to help […]

Cristo Rafael Figueroa figueroa@javeriana.edu.co Pontificia Universidad Javeriana Universidad Colegio Mayor de Cundinamarca, Colombia Abstract: This article tries to visualize three of the narrative trayectories that Colombian novelistics adopted after “The Autumn of the Patriarch” by Gabriel García Márquez: exploration of new literary forms to show the consequences of Colombian violence in female infancy and the […]

Two Strange Bedfellows – Of Ideology and Power in Althusser and Foucault

Pablo Francisco Pérez Navarro perez.p@javeriana.edu.co Pontificia Universidad Javeriana, Colombia Abstract: In the contemporary cultural and philosophical context, there is a downright devaluation of the notion of ideology, after the abuse carried out by the popularization of the Marxist theory during the sixties and seventies. This paper considers the importance of maintaining alive a certain notion […]

Robert McKee Irwin rmirwin@ucdavis.edu University of California, Davis, USA Abstract: This article describes the process of institutionalization of the field of cultural studies in the United States. The example of this process at the University of California, Davis, where a doctoral program in cultural studies was established eight years ago, while idiosyncratic, illustrates the kind […]

Manuel S. Almeida Rodríguez manuelsixtoalmeida@gmail.com Universidad de Puerto Rico Abstract: We take advantage of the 70th death anniversary of the Italian Marxist Antonio Gramsci (1891 – 1937) to make a general revision of his work’s influence, especially his “Prison Notebooks”. We place our emphasis on one of the least studied topics in Gramscian Studies, his […]

Agustín Lao-Montes oxunelegua@yahoo.com University of Massachusetts – Amherst, USA Abstract: This article develops a theoretical and methodological argument about how to analyze and transform capitalist modernity based on a conceptualization of the African Diaspora as geo-historical key category. That entails, first, a long process in which historical subjects, cultural expressions, intellectual currents and social movements […]

“Watchdogs” – Citizenship and Discourses of Development

Jorge Legoas P. cierajol@hermes.ulaval.ca Université Laval, Québec, Canadá Abstract: This article analyzes the discourse of citizenship and development made by the international cooperation network and that is used in NGO and State development projects. From a post-structuralist approach I show that the predominant controlling role of transparency principles and vigilance practices significantly affects the notions […]