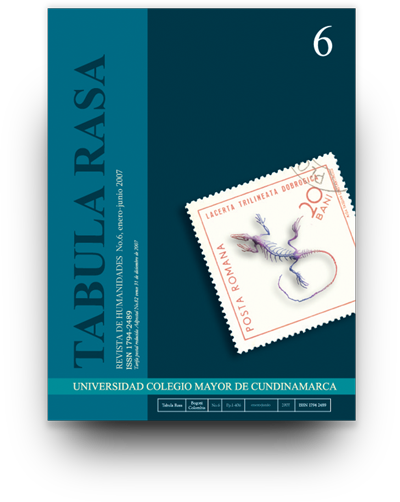 Formation in Values: An Alternative to Constructing Citizenship

María Graciela Calle marigracie@yahoo.es Universidad Colegio Mayor de Cundinamarca, Colombia Abstract: The brief historical journey that opens this article serves as a point of departure to address the subsequent issues, such as improving education of values, recuperate those values that are indispensable for the construction of citizenship, knowing and defending fundamental liberties of belief, expression, […]

Public Politics for Attention to the Displaced Population in Colombia: Emergency, Constitution and Crisis in a Field of Discursive Practices.

Jefferson Jaramillo Marín jefferson.jaramillo@javeriana.edu.co Pontificia Universidad Javeriana (Colombia) Abstract: In this article the author offers a critical approach to the logics and practices behind the production and reproduction of the Colombian policy for the attention to the displaced population (1997-2007). That policy is conceived as a discursive field, in which it is possible to identify […]

Luz Hincapié hincapie.l@javeriana.edu.co Pontificia Universidad Javeriana (Colombia) Abstract: The conduct manuals and leaflets that were written specifically for women and that proliferated in Colombia during the 19th century reveal the way women were educated and conditioned to follow a patriarchal model in their lives as daughters, girlfriends, wives and mothers. This article first looks at […]

Ana María Carreira anacarreira@etb.net.co Universidad Nacional de Colombia Abstract: The intention of this text is to demonstrate the separation between the territory (el estar) and the inhabitants (los seres), illustrated in the history of Bogotá from its foundation in 1538 today. The waters are part of the territory, and therefore they generate ways of being. […]

Baptism by Fire and the Grace of God: The Beautiful Aeronautic Memories of the Falklands War

Rosana Guber guber@arnet.com.ar CONICET- IDES (Argentina) Abstract: The Argentine Air Force turned its Air Battle on Malvinas/Falklands against the Royal Task Force into history by setting an official commemoration, promoting paintings and creating the hunting-falcon as the main war character. By founding a time-space framework and a specific actor in recent Argentine history, the aerial […]

Capitalism and urbanization in a new key? The cognitive-cultural dimension

Allen J. Scott ajscott@ucla.edu University of California, Los Angeles (USA) Abstract: The cognitive-cultural dimensions of contemporary capitalism are identified by reference to its leading sectors, basic technologies, labor relations systems, and market structures. Cognitive-cultural systems of production and work come to ground preeminently in large city-regions. This state of affairs is manifest in the diverse […]

Power, Networks and Ideology of Development

Gustavo Lins Ribeiro gustavor@unb.br Universidade de Brasilia (Brasil) Abstract: “Development” is the economic expansion in love with itself. This means that we need to know the belief system that lies beneath this devotion, as well as the characteristics of the power field that sustains it. The structure and dynamic of each development area are marked […]

Michel Foucault and the Coloniality of Power

Santiago Castro-Gómez scastro@javeriana.edu.co Pontificia Universidad Javeriana/ Instituto Pensar (Colombia) Abstract: Contrary to most of the statements associated with postcolonial studies and to some versions of the modernity/coloniality perspective, this article argues for the relevance of a hierarchic theory of power, inspired by Foucault’s lesser commonly read Lessons in the College of France, to understand the […]

“To make live and to let die”: Foucault on Racism

Eduardo Mendieta eduardo.mendieta@stonybrook.edu SUNY, Stony Brook (USA) Abstract: This article considers Foucault’s Collège de France seminar from 1975-6, entitled Il faut défendre la société, or Society must be Defended. The article does not aim to summarize the course, but rather to discern a constellation of radical departures in Foucault’s thinking. We focus on the severe […]

Ramon Grosfoguel grosfogu@berkeley.edu University of California, Berkeley (USA) Abstract: Despite appearances, the United States Empire finds itself in an accelerated decay. There are many fights, such as anti-capitalist, anti-imperialist, and anti-patriarchic taking place in the interior of this empire, invisible to the peoples that live through the ominous consequences in Latin America, Africa, Asia and […]

Elena Yehia yehia@email.unc.edu University of North Carolina, Chapel Hill (USA) Abstract: This paper seeks to establish a conversation between two novel frameworks for the critical analysis of modernity: actor-network theory, and the Latin American Modernity/ Coloniality/ Decoloniality perspective. In addition, this paper examines the remaining problems within both frameworks from the perspective of a decolonial […]

Performative Theories of Identity and the Performativity of Theories

Claudia Briones cbriones@filo.uba.ar CONICET/Universidad de Buenos Aires Abstract: This article aims to review some knowledge derived from performative theories of identity to reflect on the performativity of the theories. Even though it is vital to critically examine the capacity of agency and materiality that carries scientific discourse – a discourse authorized by excellence, especially when […]

This is my method of ethnography

The Ongoing Construction by Vasco