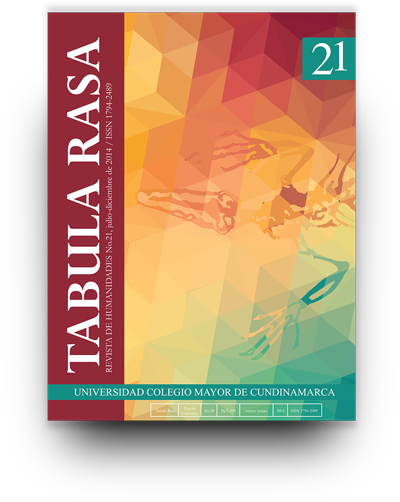 Abstract: This paper deals with the analytical process under way as a result of three related research works. Initially, it is the acknowledgement or making visible the role of woman in building her habitat; then, is the starting of local programs based on that acknowledgement and strengthening, and finally, is the analysis of why not […]

“We are Afro-socialists”: frameworks for collective action and ethnoracialization of Afro-Yaracuyan rural movement in Veroes, Venezuela

Abstract: This paper analyzes the processes of ethno-racialization of the Afro-Yaracuyan rural movement in the state of Yaracuy, in Venezuela. Following an ethnographic approach, we study how territorial organizations in this movement have given rise to new frameworks for collective action intending to mobilize both ethno-racial identities and productive/ peasant identities. Similarly, we address how the […]

The Atlantic route of Afro-descendant thought —Towards an Afro theoretical reference on the history of Trans-Atlantic slave trade, perpetual slavery and the invention of race sophism

Abstract: This paper intends to present a theoretical reference written in the path of the Atlantic by African and Afro-descendant people, between 18th and 19th centuries. Particularly, the interpretation of three historical processes relevant to the history of America: TransAtlantic slave trade, perpetual slavery and the invention and use of the race sophism. The various […]

Abstract: This research inquires for current portrayals of black, African and Afro-descendant alterities in Argentinian society, where these groups have been historically invisibilized. Here we present the results of a critical analysis of discourse in representative institutions gathering together Afro-Argentines, Afro-descendant migrants from Latin American countries, and African migrants from Sub-Saharan region, which are based in […]

New masculinities under displacement: social and cultural constructions on what being a man means —A view from Chile and Colombia

Abstract: The experience of displacement is a stressing event that deeply harms those who have to endure it, whether because of natural disasters or armed groups actions. Arriving new places is a challenge posed by the task of creating a new life. This paper gathers together the results gotten from inquiries done in the municipality […]

Conquest chronicles. Gender stereotypy in the clash between two worlds —The case of Costa Rica

Abstract: This inquiry aims to analyze, following a gender approach, Costa Rican Discovery, Conquest and Colonization Chronicles. Based on the written trace left by Cristopher Columbus, Juan Vázquez de Coronado and Gonzalo Fernández de Oviedo, we will prove how the way the described and perceived the New World played a decisive role in the introduction […]

Abstract: This paper explores utopian content in Argirópolis, a novel by Argentinian Domingo Faustino Sarmiento (1811-1888) that was published in 1850. It proposes the union under the form of a Confederation of what used to be known as the Viceroyalty of the Río de La Plata —a territory that now belongs to Argentina, Uruguay, Paraguay […]

Abstract: The subjective meaning built by social workers concerning professional intervention is addressed in this paper. In order to approach such a building, the research team is performing a qualitative study. What is presented here corresponds to the first findings gotten in that process of social research. To this effect, we begin by understanding that subjective […]

Abstract: This paper stands on the direction manifold inquiries have followed all over Latin America, by dealing with the conditions in which anthropologies emerge and develop in our continent. Particularly, among those efforts that have strived for inscribing subalternized regional anthropologies within nationwide anthropological circuits. It aims to make evident what we may call “a production […]

Power/knowledge practices in the expertise discourse

Abstract: Based on Michel Foucault’s work titled Abnormal, and references to writings by Gilles Deleuze, we address the expertise discourse standing at two power practices: as a control and normalization technique, and as a relationship of forces distributing the power of affecting and being affected between the terms behavior and act. With this, we intend […]

Abstract: This paper advances an overarching reading of nomadic philosophy created by Rosi Braidotti. The central thesis lies on the fact that her philosophy draws a deep materialism making up a radical alternative to the metaphysics of presence, which is understood as a big discourse system prevailing in the West. One that states the truth […]

Feminism, identity and Islam: crossroads, strategies and challenges in a transnational world

Abstract: This paper aims to address the phenomenon of Islamic feminism, by exploring the challenges it faces both in the Islamic community and within international feminism; considering the emerging debates around the “legitimation” of this trend, which has been tagged as an oxymoron by diverse actors. In this line, we wonder if negotiations, strains and […]

Abstract: This paper intends to show Islamic feminism from its theoretical genesis through its development in the form of a transnational intellectual dynamics, addressing its recent political practices. The aim is to look into the wages and contributions of several Muslim feminist expressions in feminist thinking and action, as well as in contemporary Muslim reformist […]

Abstract: This paper argues that intersectionality provides Islamic feminism with a useful approach to understanding the lived experiences of Muslim women. In order to become truly emancipatory, however, intersectionality should be combined with a decolonial approach. Though de-centering the secular liberal ontology of mainstream western feminism and calling for a critical analysis of the global […]

Abstract: This paper contends that there has been a definitive and negative change in the trajectory of so-called Islamic feminism. This change has been effected in large part in Westernized settings, in particular as part of the growing discourse of Euro-Islam, European Islam, indigenization of Islam, etc. which is a discourse that comes not from […]

Feminist or else? Thinking the possibility of “decolonial feminism” with James Baldwin and Audre Lorde

Abstract: Too often, Southern feminisms, including Islamic feminisms, consider the feminist movement as an ahistorical, universal and natural phenomenon. Also, it is deemed an intrinsecal sign of progress. Subjugation is so strong that Muslim feminists —for instance— do not doubt to incur in historic anachronisms looking to inscribe feminism in the genesis of Islamic history. Thus, […]

“Hijab” in Fatima Mernissi’s work or the paradox of silencing. Towards Islamic decolonial thinking

Abstract: The debate on Muslim women’s veil (hijab) has always been central in contemporary feminist discussion, and therefore it embodies the core of the conflict between two antinomic views: the one in neo-orientalist and hegemonic neo-western discourse, and a certain majoritarian traditionalist Islamic discourse. For some, it embodies patriarchal oppression while for others it is […]