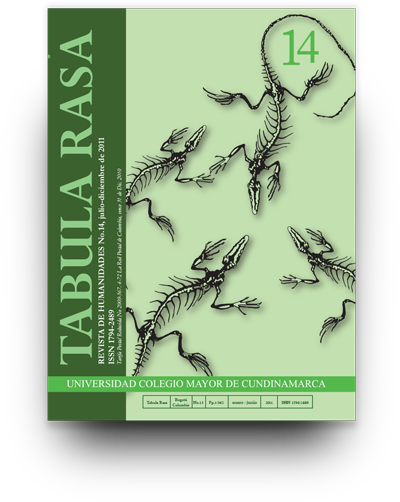 Ramón Grosfoguel grosfogu@berkeley.edu University of California Abstract: This article is about the way epistemic racism shapes contemporary discussions on Islamophobia. The first part is a discussion about epistemic racism in the world-system. The second part is on the Western male hegemonic identity politics and the fundamentalist responses to it. The third part is on epistemic […]

From sorceress to saint: Joan of Arc’s heroic piety

Isabel Balza ibalza@ujaen.es Universidad de Jaén Abstract: This paper discusses Joan of Arc’s figure as a hero. In order to do that, we examine the judicial proceedings that led to her sentence to death. We intend to define whether gender determined the way she embodied heroism. We argue her travestism was one of the main […]

Ramiro Rodríguez ramirodriguezb@gmail.com Universidad Colegio Mayor de Cundinamarca Abstract: This paper addresses intervention in Social Work, placing it between an action that is built in temporal stages, whose duration is entirely placed in the stream of consciousness within the participating individuals. In this sense, intervention would have a genesis in what Alfred Schütz calls an […]

Making a living out of the imaginaries of sea: restaurants and stereotypes on the Pacific region in the city of Bogotá

Sonia Serna sernabotero@yahoo.com Pontificia Universidad Javeriana Abstract: Restaurants serving food from the Pacific region in the capital city of Bogotá have become an inescapable reference when it comes to reflect on black people4 dynamics in this city. However, they have often been minimized and seen under the light of a few spots located in specific […]

Andrés Gómez-Barrera a-gomezb@javeriana.edu.co Pontificia Universidad Javeriana Abstract: By looking to written and oral sources, this paper identifies: firstly, the political relations between the elite and the grass-roots sectors in Villavicencio in the period 1948-1950; secondly, the existence and influence of the Gaitanist movement in Villavicencio; and thirdly, insurgent movements that arose in the capital city […]

Peter Wade peter.wade@manchester.ac.uk The University of Manchester Abstract: Most scholars argue that “race” has no relation to human nature. A minority contend that it does. I argue that “race” is a cultural category which can become an embodied part of the human experience. This embodiment helps account for the power of the idea of race. […]

Within reality. Towards de-colonial research methodologies

Julia Suárez-Krabbe jskrabbe@ruc.dk Roskilde Universitet, Denmark Abstract: This paper addresses the issue of colonialism in anthropological methodologies, and sketches a proposal to transcend it. It criticizes the knowledge divide, implicit in fieldwork practice, as well as the concepts of researcher’s critical distance and theoretical integrity. Instead, it puts forward the methodological proximity and underlines the […]

Oscar Andrés López-Cortés andreslopezc@yahoo.com Universidad del Cauca Abstract: This paper discusses the possibilities and constraints generated by juridical multiculturalism on the Colombian Constitutional Court’s jurisprudence. This analysis draws on a study of that corporation’s jurisprudence on the specific issue of cultural identity. From a theoretical point of view, juridical multiculturalism is analysed in the light […]

Eduardo Restrepo eduardoa.restrepo@gmail.com Pontificia Universidad Javeriana Abstract: This paper aims to call into question the way modernity has been understood, not only by its advocates, but also but those who think its theoretical and political practice must go through a questioning. The core argument in this paper is that modernity has never been, nor could […]

Analytics of the modern: An introduction

Jonathan Xavier Inda jxinda@illinois.edu University of Illinois Abstract: This text posits the relevance of addressing modernity as an ethnographic object, that is, to examine it from situated discourses and practices. Such an ethnography draws on a Foucaultian approach with governmentality as a key category. From this perspective, an approach is put forward examining three analytical […]

Modern another way. Caribbean lessons from the savage’s place

Michel-Rolph Trouillot rolph@uchicago.edu University of Chicago Abstract: “Modernity” is a cloudy term belonging to a familiy of words we might label as “NorthAthlantic universals”. These are particulars that have reached a universal degree; they are pieces of human history being turned into historical standards. This paper sustains that in its mainstream display, as a North-Atlantic […]

“Scientific avatars” or doing anthropology of (and against) our modern discontent

Claudia Briones brionesc@gmail.com IIDyPCa-UNRN/CONICET, Argentina Abstract: Starting with an analysis of Avatar, the movie, and its various repercussions, I examine in this paper the feeling and cosmopolitical views this blockbuster seems to have arisen, and I identify the perspectives on indigenous alterity that seem to be implied and displayed by what I call a Metropolitan […]

Sanjay Seth s.seth@gold.ac.uk University of London Abstract: This paper asks a series of very direct, if not simple, questions. How and why is it that we assume that modern knowledge is universal, despite its European genealogy and its historically recent provenance? What warrant do we have for considering this superior to the pre-modern knowledges of […]

Inés Fernández Mouján ifmoujan@gmail.com Universidad Nacional de Río Negro Abstract: Tracing Paulo Freire’s intellectual biography has as its main goal to display some of the central lines of discussion the Latin American pedagogue posits around his ethicalpolitical notion of education. In this paper, I address a critical analysis of Freire’s writing so that he is […]